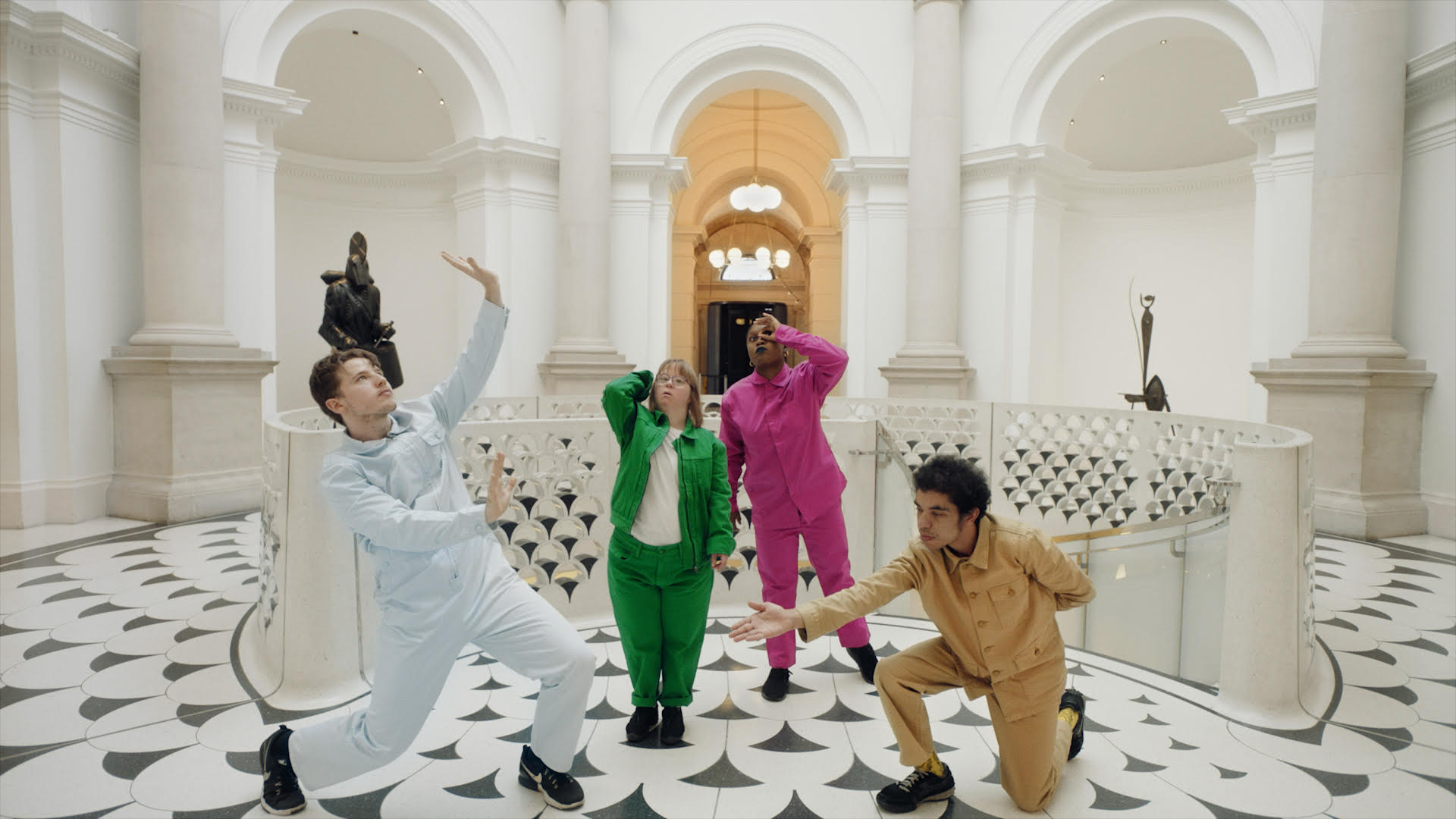 Corali, a leader in dance created by artists with a learning disability, have worked with Tate since 1998 and are experts in creatively taking up space in the galleries. Most recently, Tate invited four Corali dancers to design performances in response to four artworks at Tate Britain.

Through the 'Dancing to Art' project, Tate wanted to show what happens when people have the freedom to enjoy the gallery however they want, and how this can open up new ways of responding to art.

Find out more about Corali's 'Dancing to Art' project

Watch a video of Corali's most recent project at Tate Britain

In this article, originally written in 2018, Corali's Artistic Director Sarah Archdeacon reflects on the company's relationship with museums, galleries and cultural organisations over many years:

#DancingInMuseums ….. and before, Hashtag Dancing in Museums

2018 is off to a good start for Corali. I’m particularly happy about this, because this year is also my 25th anniversary of working with the company, so it’s a perfect time for me to reflect on our work and practice. It’s good timing to do this thinking too because during 2018 we will be working with three of Corali’s long, longstanding partnerships - the Southbank Centre, CGPLondon, and Tate - offering me the chance to look back and think about Corali’s relationships with these venues, what has made them work over the years, and continue to work today.

But firstly, what are our plans in 2018 with the three venues?

With the Southbank Centre we are performing for the Queen Elizabeth Hall (QEH) re-opening after its 2-year re-development; with Tate we are starting research for Corali’s ‘Fluxbox’ idea, our new engagement toolkit; and at CGPLondon we’re beginning the first phase of our residency in their new Bothy creative space.

Before I go back further, it is possible to see how each of these new projects has themselves been germinating since 2015. That year Corali was coincidentally invited by each venue to create work inspired by our archive, including a performance on the main-stage of the QEH before its closure for refurbishment, creating a page for a special bespoke book for CGPLondon, and performing at Tate as part of Heritage Lottery Foundation’s conference to mark the 20th anniversary of the Disability Discrimination Act.  In truth it was this 2015 research that originally prompted me to reflect on our working practices with the three venues, as well as initiating ideas that have fed directly into our current 2018 projects.

Corali’s archive is a box of photographs and flyers that document our performances from 1989 to the present. For these 2015 projects I looked at photos of the performances we had created with each venue, dating back as far as 1996, when these relationships started, just 7-years on from Corali’s original inception.

I was delighted to look back at the photos, not just to reminisce, but also to see what they revealed about our work with each venue. The photos clearly captured how closely we’d worked with each, and how, over the years we had used many different spaces within, and outside them all.

At Tate Modern we’d performed outside the building, as part of its inaugural programme in 2000 before its official opening, we’d performed inside on the Gantry Bridge, in the gallery’s private community garden, in the education studios and in the East Room. At CGPLondon we had performed in all the spaces of the old gallery before refurbishment in 2000, and in the new site since then, including a promenade piece in the garden and neighbouring park, and in the vast raw space of Dilston Grove. At the Southbank Centre, we’d worked in the Clore Ballroom, in the Hot House, in the lift lobby, and I was pleased to remember, in an empty warehouse in Bermondsey, to which our Southbank audience was transported via river boat.

In revealing the where we had worked with each venue, the photos also clearly reveal the how. It is clear how important it was to work collaboratively with each venue and in particular, key individuals from each - Shan Maclennan at the Southbank Centre, Liz Ellis at Tate, and Ron Henocq at CGPLondon.

What is also revealed by these faded, many black and white, and many dog-eared photographs, is the strength of all our ambition to make the work. This ambition was exciting and vital. It was also on a genuinely equal basis; we were all totally committed to get the work made, shown and seen, and to develop an active discourse between the performance, venue and audience.

Without Shan Maclennan’s vision at the Southbank Centre over 20 years ago, we would not have been able to perform as part of their programme at all. If she had not said, ‘yes’, to us performing in a warehouse in Bermondsey, and not only ‘yes’, but also inviting ‘what about a riverboat?’, we wouldn’t have been able to create such an exciting set up with the audience. If Liz Ellis hadn’t said, ‘yes, I’ll ask the curator if you can perform on the Gantry Bridge - we just need to get the Bruce Nauman turned down for an hour’, we would never have been the first ever dance company to perform at Tate, watched through the windows on all levels of the gallery by over 500 people. If Ron Henocq hadn’t given us a set of keys to CGPLondon so we could come and go, and create as we wanted in a way that suited us, we would not have had the opportunity to gain such a depth of artistic exploration and creative risk, so fundamental to our practice now.

Ambition was met by ambition.

The cultural landscape has changed radically since we first started making and documenting our work.  Disability dance and theatre was a very new genre back then, and site-specific and gallery based performance was still viewed as ‘avant garde’. Back in the late nineties there was definitely no, #DancingInMuseums, and seeing a dancer with a learning disability was very much a rarity.

There is now an exciting new focus on gallery-based performance, and thankfully the words disability, participation and inclusion are beginning to be heard in current art discourse.

This is the platform and the time to test ambition further.

A methodology can never be stagnant and by encouraging equal levels of ambition with venues, promoters and galleries, we can continue to learn from each other, and to test new ways of engaging audiences, and to continue to deepen the artistic recognition and empowerment of artists with a learning disability.

The stage is set for exciting times ahead.