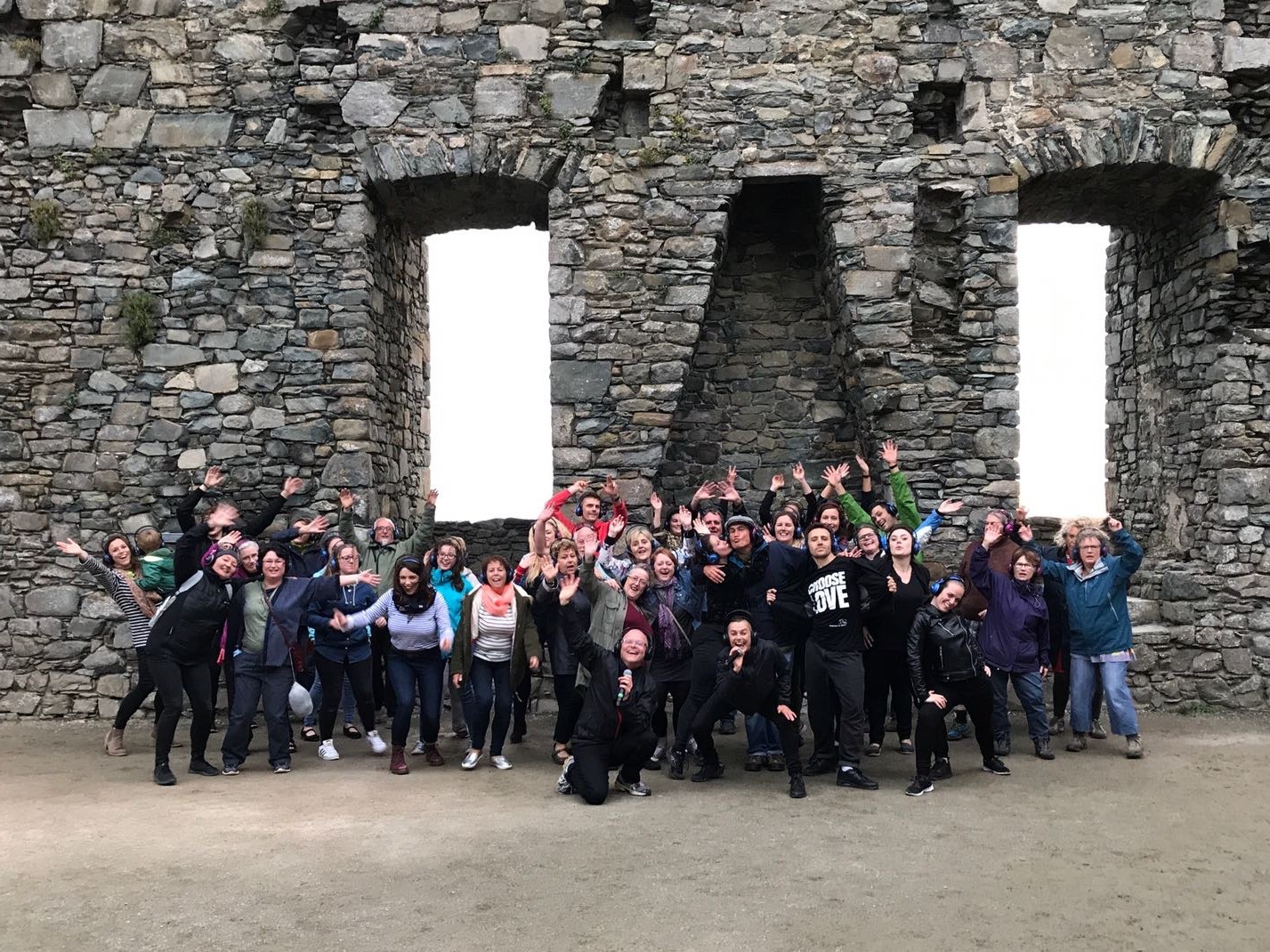 In 1400, Owain Glyndŵr, the legendary rebel Prince of Wales, rallied his supporters in an uprising against the English king, Edward I.

By 1409 he had disappeared without a trace.

In this hour-long interactive show, audiences discover his destiny on the dancefloors of castles, fields and the steps of urban buildings. Led by a cast of six performers they dance the rebellion to a mix of club-classics, Welsh electro and prog rock.

Taken through the highs and lows of the uprising that include a fierce twmpath, medieval dance-offs, sieges, betrayals and defections, the audience becomes the story.

This is (Welsh) history with a twist.

There is one legend. Some headphones. And lots of dancing.

History of the project

Commissioned in 2017 for Visit Wales’ Year of Legends, with support from CADW, Chapter, Gwynedd Council, Conwy Council, and Anglesey Council. “Owain” has since toured in Wales and England.

In 2018, Owain Glyndwr finally made it to his rightful place, Senedd Cymru, as part of the National Eisteddfod in Cardiff, as part of a national tour.

In 2019 it was also presented at Surf the Wave, the UK dance showcase, in Bournemouth.

“Owain” was due to be presented as part of Dance Umbrella, London in autumn 2020, but due to the Coronavirus pandemic, this was unfortunately cancelled.

Light Ladd & Emberton's award-nominated show was originally created in 2017 with investment from Visit Wales, in a partnership with Cadw, to be shown in the UNESCO world heritage castles of Edward I in north Wales.

In the production, audiences dance the rebellion of the last Welsh prince of Wales, from 1399 onwards. It has toured three times now, in 2017, 2018 and 2019, including to urban public spaces and other heritage sites, including Abergavenny Castle, the National Eisteddfod in Cardiff Bay and as part of Surf The Wave, the UK Dance Showcase in Bournemouth.

It was incredible. When you looked around, everyone, I mean everyone looked like they were having the time of their lives spinning round and dancing in the middle of Harlech castle on a lovely summer’s evening looking out to sea.

Full length capture of the show from Harlech Castle

Read more about the Disgo Zoom Disco - taking the revolution to Zoom!