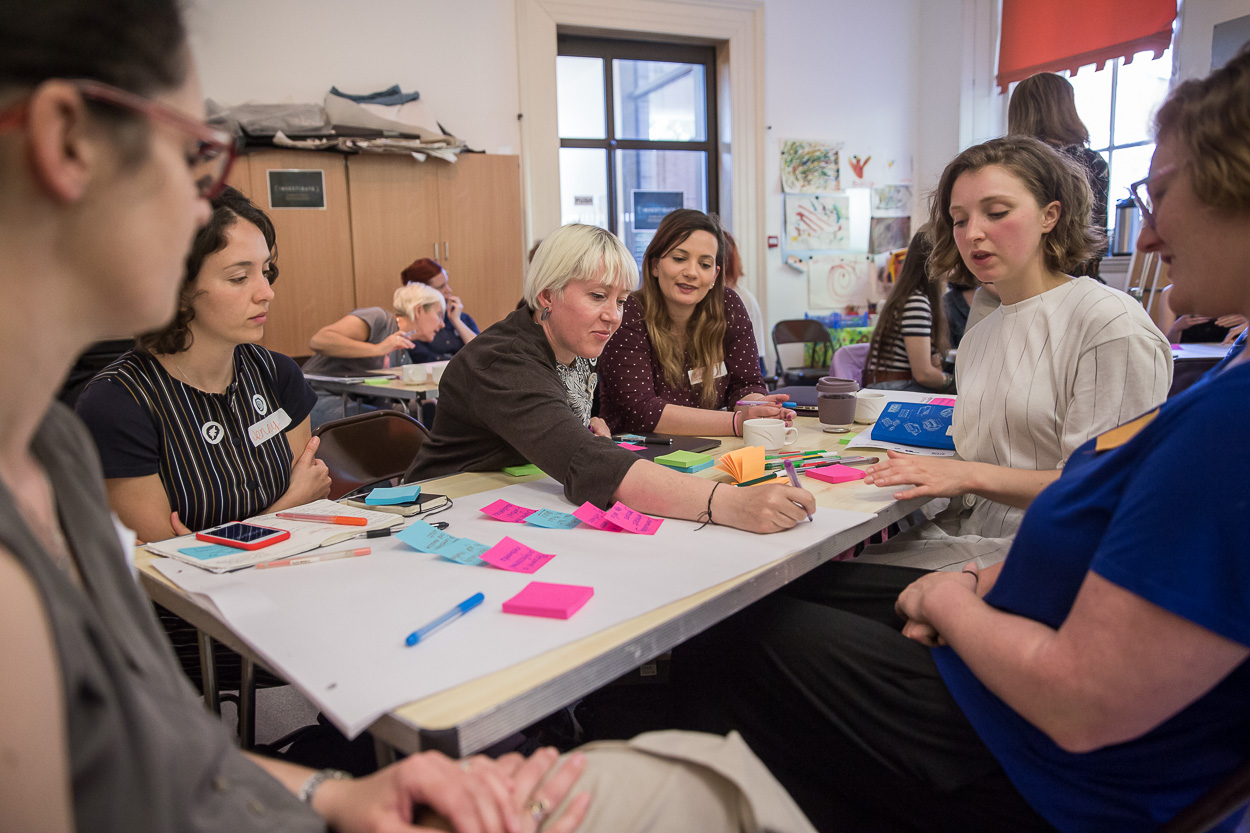 On 24th May 2019 we held the first meeting of the Imagination Museum Consortium at the Collection Museum and Usher Gallery in Lincoln, facilitated by Emma McFarland and attended by 24 arts/heritage professionals from across the UK.

It was important to us to facilitate a really proactive day, integrating practical examples of creative responses to heritage and museums and lots of opportunity for discussion with different groups.

We began the day with a short extract performance from The Imagination Museum piece (which was originally created for The Collection in 2013, in collaboration with local primary school children). 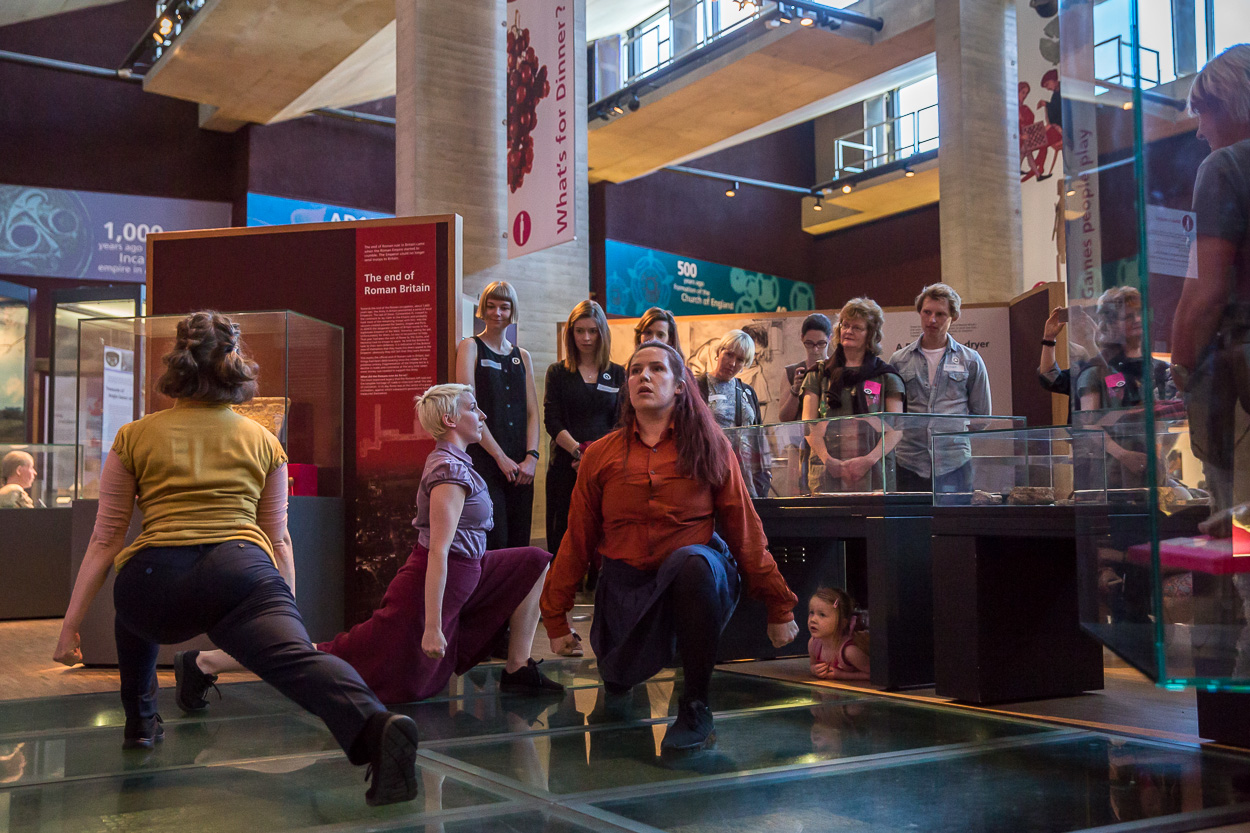 We then heard ‘lightning talks’ from Katie Green (Director, Made By Katie Green), Anna Scott (Mayflower 400 Officer for West Lindsey District Council), Jenny Reeves (Director, About Time Dance Company) and Tim Casson (Director, Casson & Friends) in response to our question for the morning: “Dance-heritage collaboration: what does it mean for our engagement, interactions and relationships with the public?”. 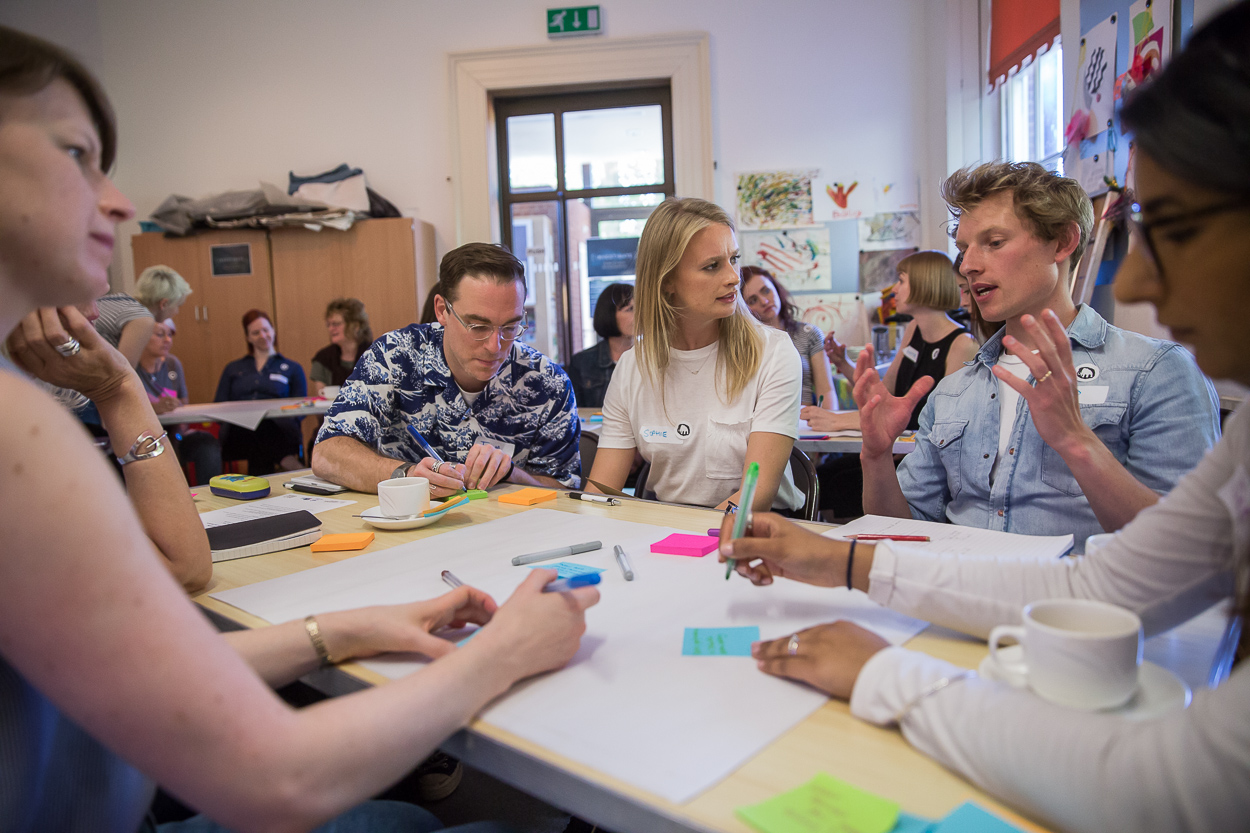 In the afternoon, we visited artist Belen Cezero (a photographer and film-maker) in the temporary studio she had set up in The Collection Museum as part of the OPEM Artists in Residence Programme for 2019. By working in this space her process was open to members of the general public and we talked to her about the impact of this way of working on her practice, following on from our morning discussion. 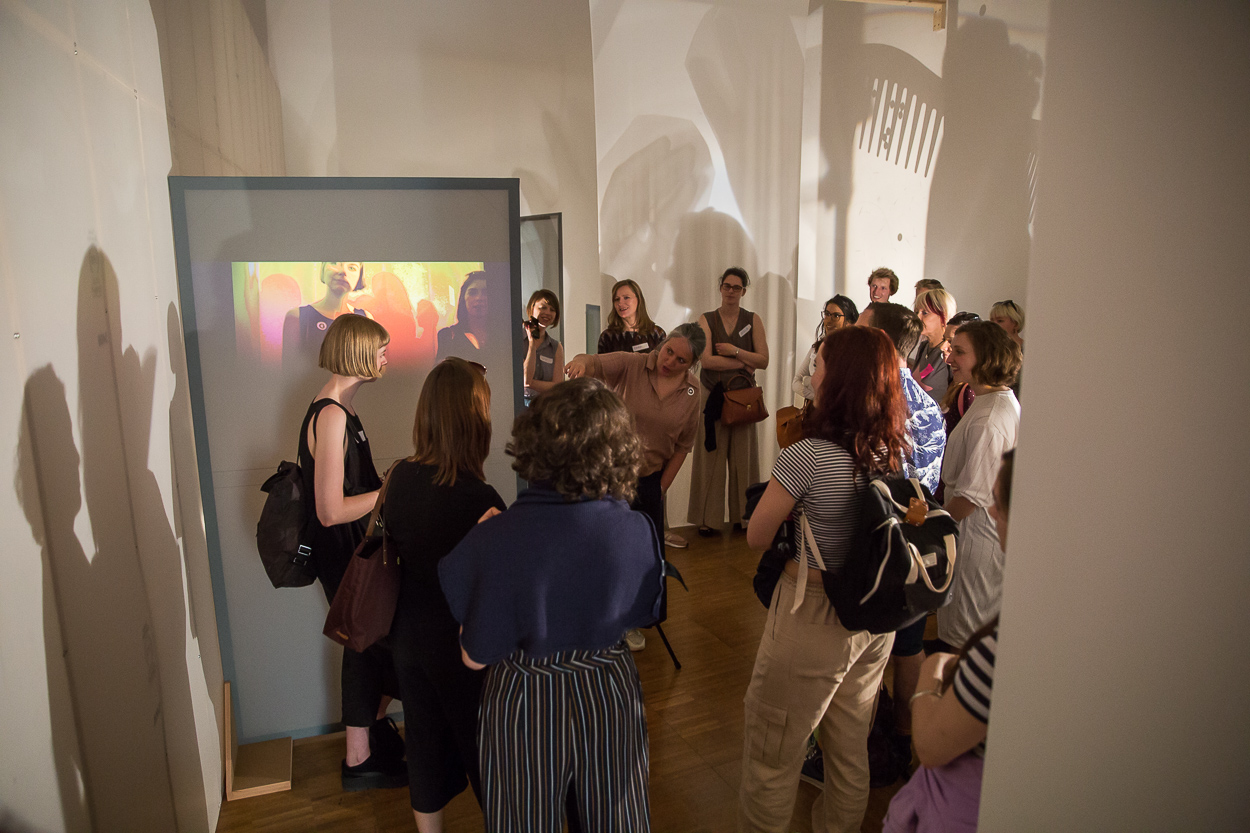 We then tackled an interactive workshop ‘Designing the Imagination Museum Consortium’, with a view to coming up with a list of priorities for the Consortium’s work going forward.

This pilot Imagination Museum Consortium workshop was very exciting, with a wealth of experience in the room. In spite of the great range of contexts in which people worked, there seemed to be a real synthesis of people’s attitudes towards the potential benefits of working with dance and movement in heritage contexts and next steps for trying to make this happen more frequently.

I will try to outline some of the main topics of discussion here, and then reflections are outlined in our follow-on post: First Imagination Museum Consortium Day: what's next.

Anna spoke to the group about the way her work (generally, but also specifically in relation to the Mayflower 400 commemoration) crosses over between heritage, culture and tourism. She also drew out some of the benefits and challenges of working with dance as part of a national heritage commemoration (Anna has been instrumental in getting Made By Katie Green’s Imagination Museum: Mayflower 400 Strategic Touring project off the ground) e.g.:

There is a bit more information from Anna's talk on the Resources page here:  https://imaginationmuseum.co.uk/admin/resources/theimaginationmuseumconsortiumannascottnotes-1.pdf

Following on from what Anna said about dance/heritage engagement having the potential to build a community’s sense of pride and local identity, choreographer Jenny Reeves gave us a run-down of some of her top tips for making work in response to the local story of a particular place, for and with the local community (specifically referring to her work Cotton which you can read about in her case study here). These tips included:

There is a bit more information from Jenny's talk on the Resources page here:  https://imaginationmuseum.co.uk/admin/resources/theimaginationmuseumconsortiumjennyreevesnotes2.pdf 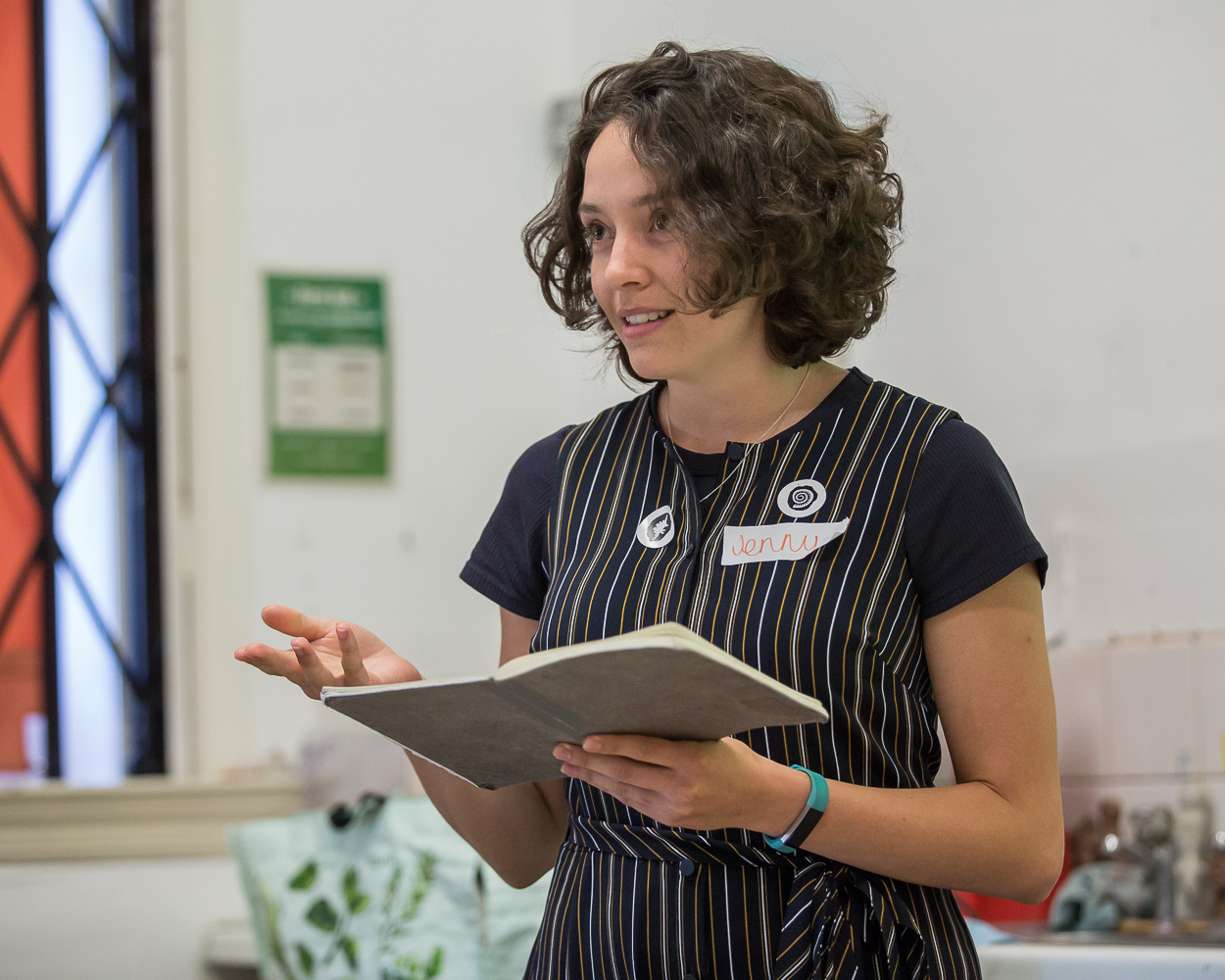 Speaking about his Kettle’s Yard project in response to their SUBJECT exhibition by Antony Gormley in July 2018, Tim described a project in which, by gathering an invited and incidental audience’s responses to Gormley’s artwork and using those to create a new piece, he was able to give the general public ownership over those responses, over the space, over the artwork. He encouraged them to (and curated a context in which they could) share in the creative process, therefore increasing their understanding of that process and preventing them from feeling intimidated.

Tim presented his common misconceptions about the rules of working with dance in a gallery:

Tim opened up his work in progress to the visitors, whilst also respecting that people might not want to engage with the performance, so only taking over part of the gallery.

The project frequently brought Tim and the dancers into conversation with people visiting the exhibition.

Interacting with the space in what might have been seen to be an unusual way, the dancers’ encouraged the public to also alter their behaviour in the space, and perhaps to make themselves more comfortable.

A family set up camp in the corner of one of the galleries while Casson & Friends were in residence at Kettle’s Yard, and the dancers worked with the children to create a dance using their responses to the artwork. The final performance brought together the responses of people with a range of experiences of making/engaging with art.

Tim described that more traditionally it was a part of the job of a performer to try to make what they were doing seem really effortless. However, he wanted to open up the rehearsal process, making something with people so that in the end it would feel more like it was for them. 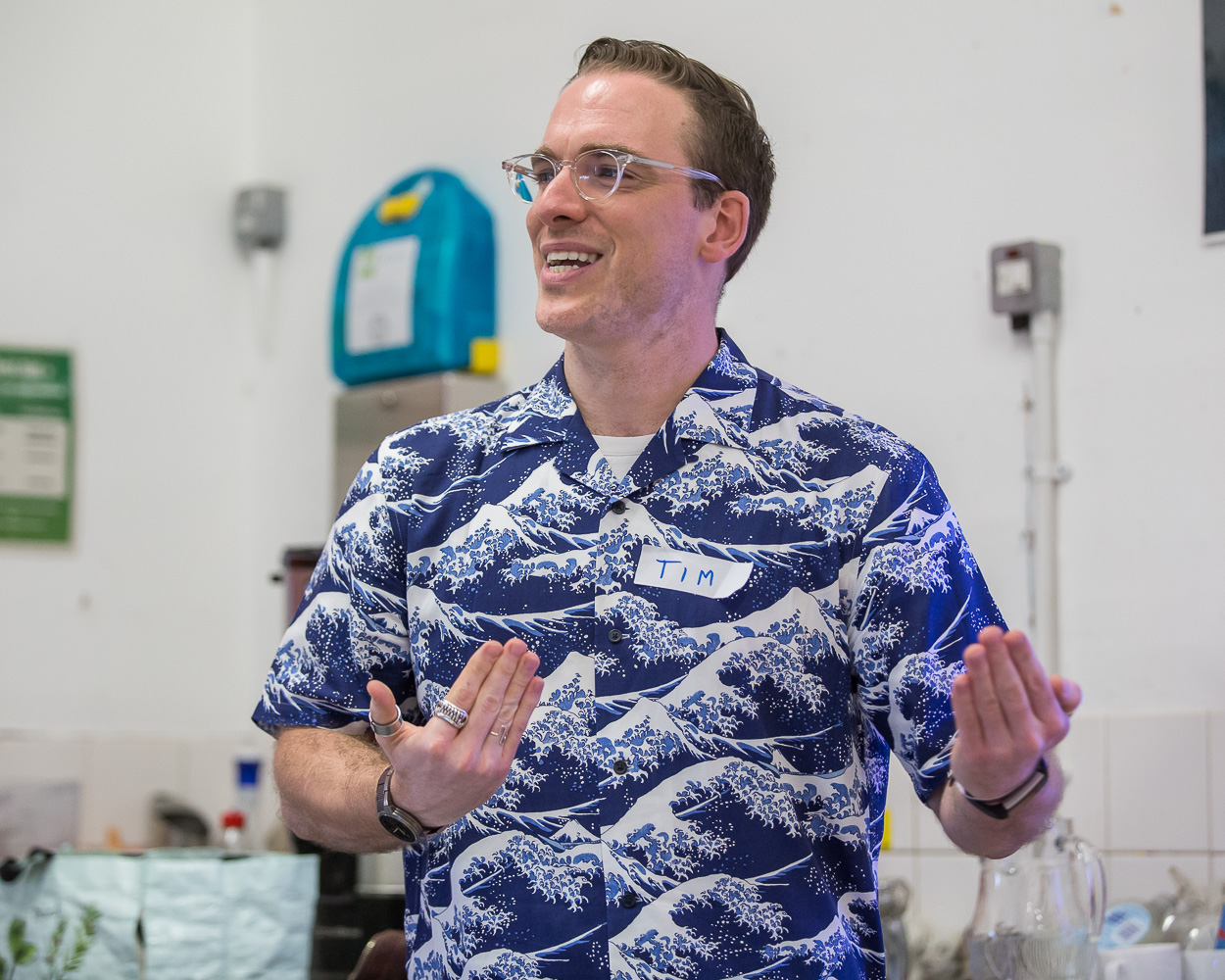 For further reflections on what happened on the 24th May, and proposals for ways we can move forward as a Consortium, please see our follow-on post: First Imagination Museum Consortium Day: what's next.

With thanks to Arts Council England and Surf the Wave for their invaluable support of our first consortium event, and to Jenny and Andrea at The Collection/Usher Gallery for making it possible, as well as to all of our contributors and participants.

In line with our Imagination Museum: Mayflower 400 Strategic Touring project, we hope to offer 2 further consortium events in March (Hampshire) and October (Plymouth) 2020, so do join our Consortium here (for free) if you would like to find out more information about those events when they happen, and send us your case studies, events, opportunities and resources in the meantime, to katie@imaginationmuseum.co.uk .